What is Periodontal Disease?

Periodontal diseases are amongst the most common infections, with the global prevalence estimated at 20-40% with severe disease affecting 10-15% of the population1. In Australia, it is estimated that 25% of individuals 35 to 54 years of age have periodontitis, with the prevalence increasing to >40% among those aged 55 – 74 years, and ~60% for those aged above 75 years old2. The mildest form of periodontal infection is gingivitis, where the infection and inflammation is limited to the gum tissue and does not involve the supporting bone. Gingivitis is reversible and non-destructive, however it can progress to periodontitis which results in destruction of supporting bone. If left untreated, periodontitis can result in tooth loss. It is a chronic disease, and while treatment can usually prevent further loss of supporting bone, long-term maintenance is important to prevent progression of disease. Bone loss in most situations cannot be reversed.

Periodontal disease is caused by an accumulation of bacterial plaque and deposits of calculus on the root surfaces within the gum pockets. In areas of plaque stagnation, the accumulation of bacterial toxins trigger an inflammatory immune response. In someone who is susceptible, this immune response may be destructive eventually causing loss of supporting bone leading to mobility and eventual loss of the affected teeth. 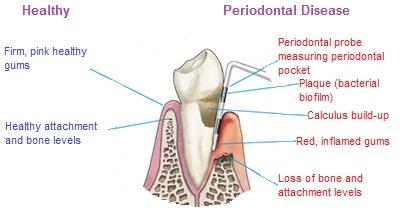 Periodontal disease is a leading cause for tooth loss, and is often detected only when the destruction is fairly advanced. The common signs and symptoms include:

Bleeding gums – Healthy gums do not bleed when brushing or flossing. Thus it is important to seek attention if bleeding gums are not responding to home care measures.

Bad breath which is persistent – The bacteria which cause gum disease produce substances which are strong in odor. When these bacteria are stagnant in areas which are difficult to clean, bad breath persists even after brushing and flossing.

Sensitivity – When roots of teeth become exposed, sensitivity can occur, particularly to cold.

Tender gums, red or swollen gums – These are all indications of inflammation of the gums as a result of the infection.

Smoking – Smoking affects the body’s immune system and its ability to fight infections. It also encourages the growth of the unfriendly bacteria which predispose to periodontal infections.

Diabetes – Diabetics who have poor control of their blood glucose may have impaired immune function thus predisposing them to infections such as periodontitis. Recent studies also indicate that severe periodontitis can increase the likelihood of diabetic complications3.

Genetic susceptibility – There are certain genes which affect the body’s immune response towards the plaque bacteria which can result in excessive destruction of the supporting bone.

Other illnesses – Any illness that adversely affects the immune system can potentially increase one’s susceptibility to periodontal disease.

Medications – Certain medications can cause dry mouth which decreases the protective effect of saliva. Some medications can also cause enlargement of the gums, making it difficult to maintain good oral hygiene.

In most people, periodontal disease can be prevented. The best prevention for periodontal infection is to control the plaque which accumulates on teeth. The naturally occurring crevice between the tooth and the gum is where periodontal disease-causing bacteria accumulate. While most people are aware of the need to brush their teeth twice a day, most are not as vigilant with cleaning the surfaces in between their teeth. Other than floss, there are various other tools that may be used to clean the surfaces between teeth. The correct technique, tools, and time spent are important for achieving optimal plaque control. Your periodontist, dentist or hygienist can assist you in demonstrating the correct method for your home care. Additionally, in difficult to clean areas, plaque that is not removed hardens and forms “tartar” or calculus which can only be removed by your periodontist, dentist or hygienist. Thus it is important to have regular professional cleans as prevention for periodontal disease.